I had the pleasure of attending the ReInvent Law conference held at Cooper Union Hall in New York City on Friday. It was a great event. Dan Katz and Renee Knake have built and are building something amazing. Whatever it is or however it develops, I think that ReInvent Law must be recognized as an important institution for a calcified profession that is in dire need of flexibility and nimbleness.

Before I launch in to my review, I should admit that I’m far from objective about ReInvent Law. I’d go as far as to say that I’m a ReInvent Law fanboy. I wrote a defense, of sorts, of the Silicon Valley event on my blog shortly after it ended. I pitched a talk for the London event and was invited, though in the end could not go, to give a 6-minute ignite-style speech there. And I spoke at the just completed New York City event. It won’t come as a surprise that I enjoyed the event.

A main reason I’m glad that I attended was the opportunity connect face to face with fellow travelers on the road to change the profession. One person I finally met in person was Josh Kubicki. Among other things, Josh was an organizer or Lex Redux, an event to connect financiers and legal entrepreneurs held the Wednesday night before ReInvent Law. While Josh was very pleased with the results of Lex Redux he reflected that it started out feeling a bit like a group therapy session with the attendees commiserating over the challenges of trying to disrupt a relatively dysfunctional and entrenched industry. While ReInvent Law definitely was not a group therapy session I enjoyed it immensely because it was an opportunity to connect with my “tribe.”

Those of us working to change the industry are usually surrounded by lawyers who don’t know change is coming or, worse, fervently believe that it’s not coming. It’s easy for us to feel isolated. ReInvent Law presented an opportunity for the tribe to gather, meet in person (many of us for the first time), and realize that the passion and energy for change is greater and more broadly held than we see on a day-to-day basis.

A related reason that I really, really enjoyed my time in New York was the Data Privacy Legal Hackathon. I’ll recap that experience in a separate post but the Hackathon significantly added to the community connection I initially felt at ReInvent Law.

The talks at ReInvent Law were compelling. Because I was speaking I couldn’t closely track all of the other talks. However, I did hear two talks that I want to mention:

One was from event co-organizer Renee Knake. As I understood it, Knake argued that unauthorized practice (UPL) rules are restricting the expression of protected First Amendment speech by limiting how, where, and to whom legal advice can be spoken. The logical conclusion of this argument, though I’m not sure Knake said it explicitly, is that UPL rules need to be rethought or abolished. In her estimation doing so will both bring professional legal practice into line with the Constitution but also increase access to justice by allowing legal speech to be heard and disseminated more broadly. UPL restrictions are the cornerstone of the monopolies on legal advice that lawyers enjoy and Knake took direct aim at them. Normally I’d say that a challenge to UPL would be a very tall order.  However, Knake’s and Katz’s earlier calls for non-lawyer investment in law firms have gotten surprising traction from the broader legal community (theABA’s response notwithstanding) so I’m intrigued to see if/how this idea develops.

The other talk was from MSU Law Student Karen Francis-McWhite talking about building resilient legal communities. While Francis-McWhite’s talk was centered on the website she’s building, mihomstead.com, it underscored larger principles of community, collaboration, and access to justice that many of the tech and corporate-heavy talks did not address. Further, it was a good reminder that reinventing must be done as much with “soft” skills as with hard ones. It was compelling follow-on to Knake’s talk. It seems to me that loosened restrictions on UPL would probably encourage the development of the types of communities Francis-McWhite is proposing. Francis-McWhite’s theme of expert legal communities was also an excellent preface to Richard Susskind’s later comments on the same topic. Finally, Francis-McWhite is an MSU law student so kudos to her for big, bold, confident thinking.

Now a few thoughts on areas of improvement:

Much was made on Twitter about the lack of women on the speaking agenda. I want to take a bit of a personal approach to this criticism. I had lunch at ReInvent Law with two good friends Cristin Carey from Avvo.com and Janelle Milodragovich from Elemental Legal Analytics and my Seattle group co-founder. Being the dumb, privileged, white male that I am, I asked Janelle and Cristin for insight. Because many of the speaking spots were filled by volunteers at ReInvent Law, what’s an event organizer to do when the majority of people who put themselves forward are male? Janelle and Cristin were quick to educate me on the need to actively seek diversity. If the speaking slate for ReInvent Law was looking male heavy, organizers needed to reach out to competent qualified female candidates and ask them to participate in order to even out the balance.

While this is probably very obvious to the more enlightened it was an important bit of information for me. Particularly in light of another project I have. I won’t spend much time on it here but I’m blogging once monthly for the Ms. JD website about the professional and personal divisions between men and women in the law. (Here’s the link. Scroll down. You’ll find me. I’m the only man.)  Of particular interest to me in this project is the “Lean In” movement and discussions about the increasing prominence of women in the legal workforce. While there’s much to be said about that – and you can read more about what I’m writing in my first post – one thing that Sheryl Sandberg wrote in Lean In was that women have a tendency to hang back while men tend to charge ahead. To be clear, I’m not saying that charging ahead is always better. In many ways it’s just a stylistic difference.

In any case, I brought Sandberg’s insight up to Janelle and Cristin and they generally agreed. And, then, they further emphasized to me that as a result of that tendency, the ReInvent Law organizers might have needed to reach out to women more effectively.

A diversity of voices is absolutely needed as we all work to remake the profession. This is something that I’d like to see change at future ReInvent Law events. Even if it means that someone like me doesn’t get a turn.

Another criticism I had was the general paucity of access to justice, overburdened courts, consumer, solo/small firm, and legal employment talks, particularly in the second half of the day.Carolyn Elefant blogged about the underrepresentation of solo and small firm representation among the speakers before the event. The profession has some significant issues in access to justice, the coming consumer law revolution, the glut of underemployed and unemployed attorneys, and the disruption coming to solos and small firms.  You can’t cover everything in one day but the afternoon at ReInvent Law seemed to have a heavy focus on corporate and in-house topics. It would have been nice to hear about some of the profession’s other challenges. I would have loved a talk on innovating in the law and social entrepreneurship, for example.

A final interesting criticism was one I heard at the Hackathon on Saturday. One ReInvent Law attendee said that not one presentation had a single line of computer code. ReInvent Law is not all about technology but it was certainly a theme. Further, some outstanding talks at prior events have focused on coding: I’m looking at you Sam Rysdyk and Michael Poulshock. I’m unsure whether that was really missing from ReInvent Law NYC but as a self-proclaimed legal hacker I have to add that coding proficiency if not competence will be a requirement for lawyers to thrive in the coming decades. You know, “We Need More Legal Hackers, Now!”and all that.

In sum, it was an incredible event. I’ll add an additional +1 for the open, free (and by “free” I mean no-cost) nature of the event.  (Hat tip to Sarah Glassmeyer for calling this out in her review of the event.)

That is exactly how change and community should be built. 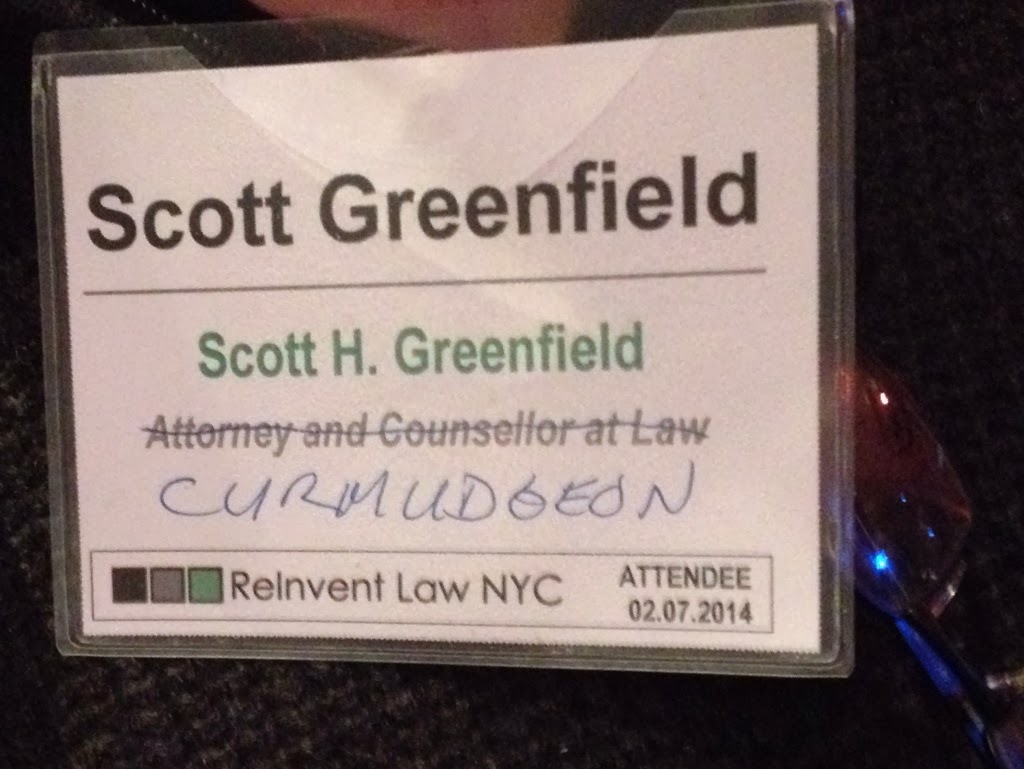 ReInvent Law co-organizer Dan Katz has said at prior events that “The future of law is already here. It’s just not evenly distributed.” However for those of us who attended ReInvent Law in New York City on Friday February 7th 2014 there was plenty of the future distributed. And I, for one, liked what went around.